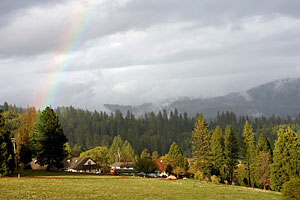 “No mere economic system can possibly create a successful community. No mere decision to live and work together, without a crystal clear, high purpose in life, can possibly bond people in unity during stressful times. No merely social experiment will ever work.”

— Swami Kriyananda, Cities of Light – A New Vision for the Future

However, just as one cannot become adept at every musical instrument, one cannot become adept at every religious practice. We have chosen therefore to focus on one path. This focus has served us well as individuals and as a community. As individuals we have the benefit of being immersed in one discipline, like a pianist going to a school exclusively for pianists. As a community we have the benefit of a deep level of harmony and attunement to one another that arises from shared spiritual practices.

At Ananda, the spiritual well-being of the individual is placed before any policy, or the outcome of any project. Often, someone is asked to serve in a particular position, not because they have the best skills or training, but because doing so will help them to develop the qualities they need to progress on the spiritual path. In the same light, a community project or policy has often been put aside if it isn’t serving those involved in the highest way.

Truth is something, as Swami Kriyananda said in one of his talks, that we have to know and understand from the inside, in our heart.  When we embrace the truth with the right attitude, even if it seemingly flies in the face of “common sense,” things will flow smoothly and turn out positively.

In his book Religion in the New Age, Swami Kriyananda says,

… a certain amount of discipline is necessary in any institution. Anarchy is not freedom. The more such discipline proceeds from within an individual, however, instead of being imposed on him from without, the better, both for the organization and for the individual himself and for his relation to the organization.

At Ananda Village, we work with people as they are, rather than forcing or expecting anyone to be a certain way. Following Yogananda’s example (“I discipline only those who want it, never those who don’t”), individuals gain strength spiritually by being given the freedom to choose, from the inside, that which is most expansive.

Rather than emphasizing the negative, attention is given to the positive. If someone doesn’t want to do something that is asked of him, we ask someone else.  In this way, we are empowered to choose to grow in our joy and attunement over time, and can observe, in our own and others’ lives, those choices that lead to the greatest happiness.

In simplicity you will find — even if you never sought it there! — the sweet happiness your heart has always craved. Life will give you more than you ever dreamed, if only you will define prosperity anew: not as worldly gain, but as inner, divine contentment.